Another Closed Door? Or an Open Window...

"For I know the thoughts that I think toward you, says the Lord, thoughts of peace and not of evil, to give you a futre and a hope."   Jeremiah 29:11 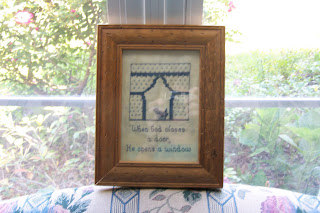 The picture of the plaque to the left is the original image that inspired the title of this blog, "Closed Doors, Open Windows".  Years ago a young lady, who was a member of our church youth group, cross-stitched that picture and gave it to me as a gift.  I was very taken back by this gift, as well as by the giver...as she was one of our more troubled youth at the time...a young girl who had seen more than her share of slammed doors and perhaps "broken windows" in her young lifetime.  I remember wondering at the time how a girl I had perhaps misjudged because of her outward appearance and sometimes inappropriate behavior could have such a mature insight into a message that became so encouraging and precious to me as the days and years have passed by since.  God knew then what I couldn't see...and He inspired a wayward young teenager to send me a message from His heart...that still amazes me today, some 23 or more years later.  I've lost track of that young woman...have no clue whatever happened to her after we left that church.  I can only pray that somehow this act of kindness shown toward me, her pastor's wife, also had a lasting and profound impact on her life...and helped her to seek those open windows that led to peace and joyous life in Christ.

When I began to write this blog over a year and a half ago, I chose this as my title because I was in the middle of experiencing one closed door after another in my search for employment.  Finally, God opened a window of opportunity for me and has blessed my life in the process in so many different ways.  This blog itself, is an open window of opportunity, that has hopefully not only encouraged me, but has also been an encouragement to those who have taken the time to read it.

Now I find myself in the midst of another closed door...this time my husband's.  He was given some difficult news at his place of employment this past week which, due to no fault of his own, means that he is now exploring and searching for an open window of opportunity.  This comes at a very difficult time in our lives...(is there ever a good time to be unemployed?) and puts us in a real quandary about what the next step should be.

I cling to the promise of the verse quoted above from Jeremiah 29:11...God is speaking to the Jews who have been in captivity, but I believe He is also speaking to us when He says,


"For I know the thoughts that I think toward you, says the Lord, thoughts of peace and not of evil, to give you a future and a hope."

The Lord knows how much we long to be in that place of peace...and to have that hope of a good future...not something that is evil.  God has promised to care for us and to shelter us under His wings.  The Psalmist cries out to the Lord in Psalm 57...and I cry along with him:


"Be merciful to me, O God, be merciful to me! For my soul trusts in You; and in the shadow of Your wings I will make my refuge, until these calamities have passed by."

The Psalmist then goes on to sing his praises to God in verses 5 and 11:


"Be exalted, O God, above the heavens; Let Your glory be above all the earth."


"I will praise You, O Lord, among the peoples; I will sing to You among the nations.  For Your mercy reaches unto the heavens, and Your truth unto the clouds."

So, here I am again, Lord.  I don't like the sound of that door that just slammed shut in our ears, but I am seeking Your face...and waiting for that open window of Your opportunity to appear.  We've been here before, and You did not fail us.  Therefore, I will continue to trust in You; and "in the shadow of Your wings I will make my refuge, until these calamities have passed by..."  Amen.

I just noticed that there is a bird sitting in that open window above..."Shadow of Your wings"...hmmm...maybe there was more to that little image than I realized...

Lord, I also pray for that young woman who so sweetly stitched that verse for me so many years ago.  I don't know where she is today, but YOU know.  I pray she is safe in the shadow of Your wings...and that You will bless her in a very special way today.  Amen.
Posted by Pamela M. Steiner at 10:38 AM 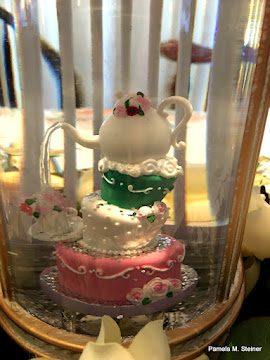