Hello Friends! The past few days have been rather busy for us.  Seems like we can go for days and weeks with nothing much happening of interest, and then things come in bunches and you find yourself running from here to there and back again all at once!
But thankfully, these last few days have been all good things, so we are very thankful for that.
Yesterday we took a little ride down through the forest to the other side to meet up with my hubby's family to celebrate his brother's birthday, which actually isn't until tomorrow (4th), but this was the best time for us to get together. They live about 2+ hours away from us, so we try to meet in the middle when we can. 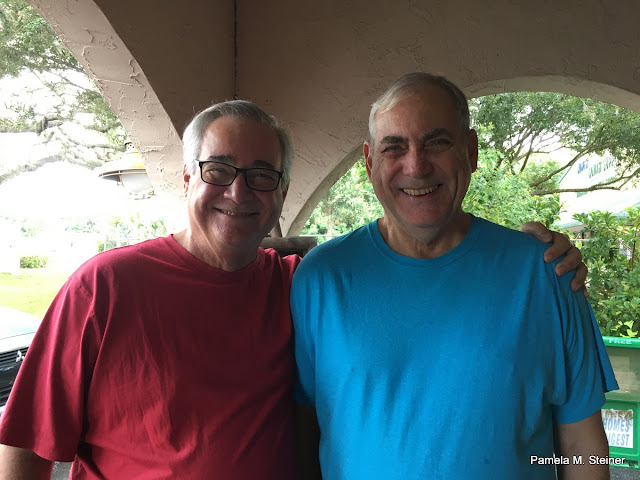 Here's the brothers Billy and John. Can you tell they are brothers? 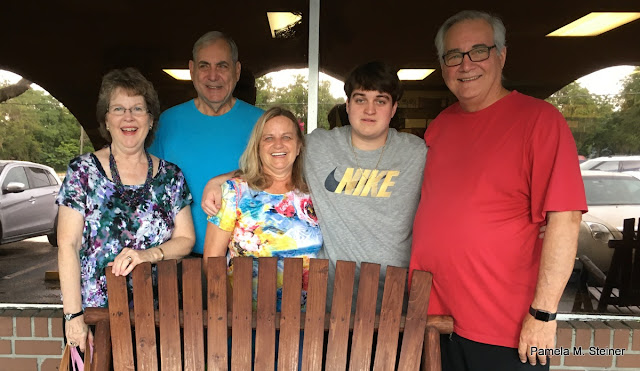 And here we are together, with Billy's wife Peggy and their son Nicholaus. Their daughter Shannon had to work so couldn't come. 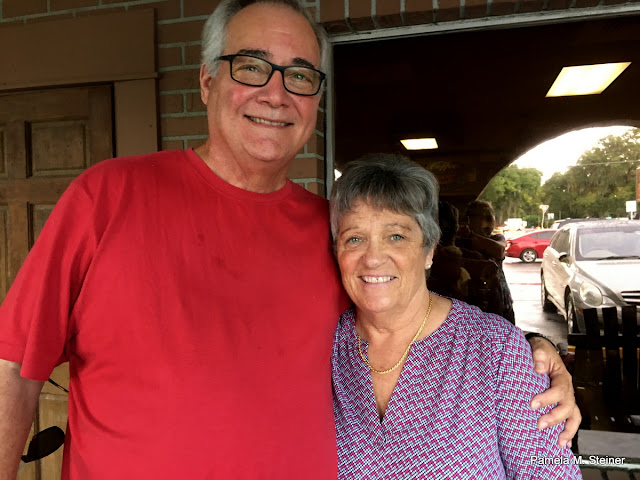 And here's Billy with our good friend Paula, whom we have known for many many years and she is one of those friends who is actually more like "family" to us all. 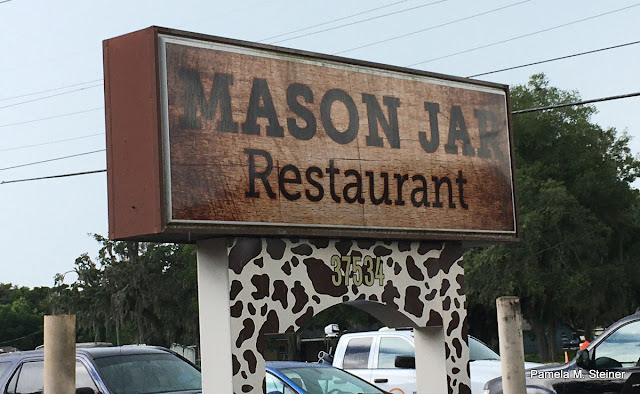 The Mason Jar is a great country restaurant, with good old southern cooking. I enjoyed a vegetable plate of Collard Greens, Lima Beans cooked with a little ham, Stewed Tomatoes, and Candied Yams and Cornbread.  It sure was good! Beats a hamburger any day!
Over the weekend we had some much needed tree work done in our yard.  I am always amazed at the abilities of these people who can get themselves out on a limb and cut it off...of course without being on the wrong end of the limb... 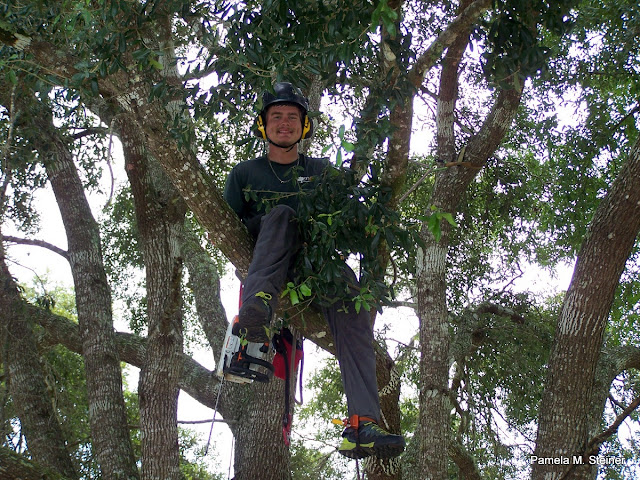 This fellow was up in our big giant oak trees in the front yard, cleaning up a lot of heavy and/or weak branches that were starting to hang down too low.  With August and September upon us, we are just entering our major hurricane season of the year, and trees can become our worst nightmare in a bad storm. 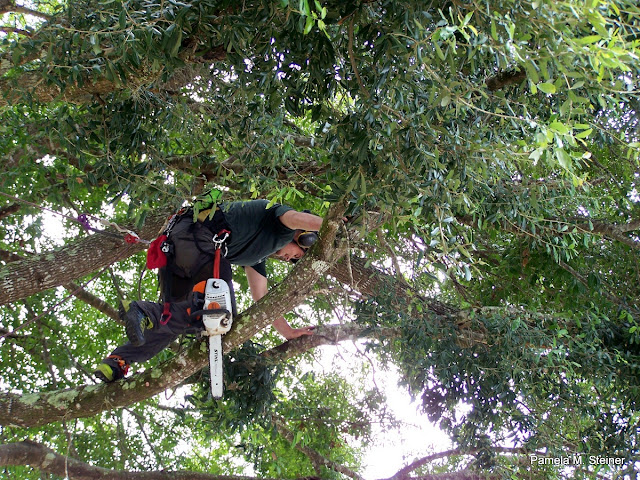 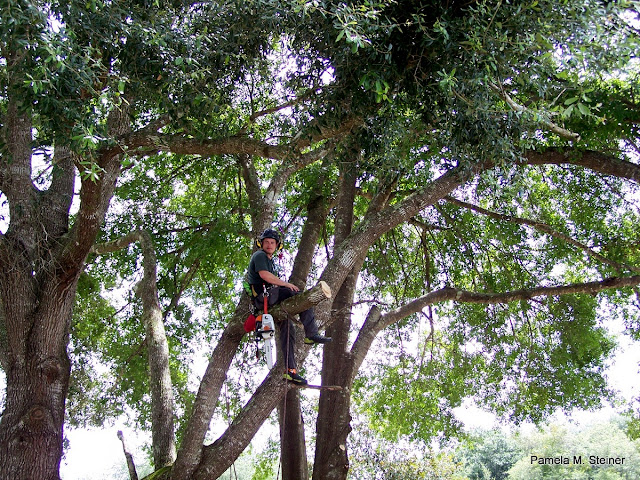 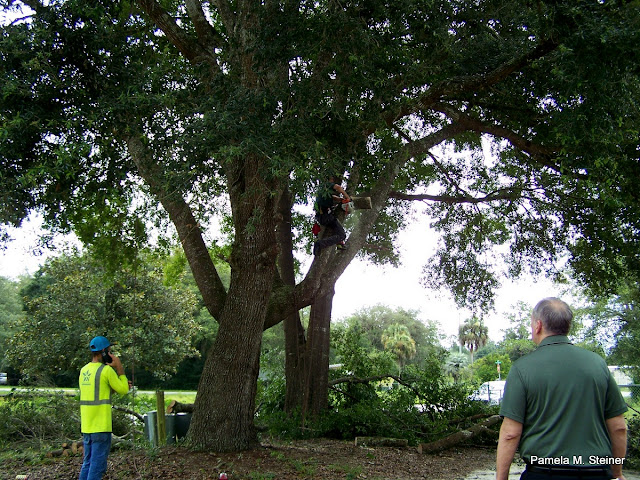 After cleaning up the front yard trees, they moved to the back side yard, where we have a lot of dense overgrowth of trees that were in bad shape and potentially dangerous to our neighbor's house.
So they started cleaning up a lot of little trees as well as the big ones, trying to let more light in the area so the good trees can grow stronger and healthier. 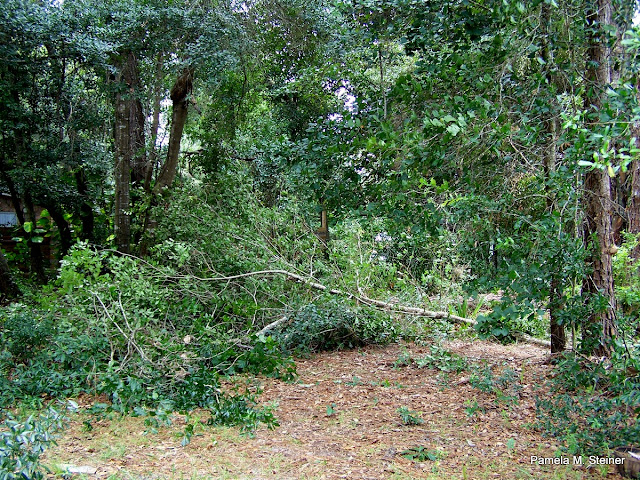 Sadly, they had to remove a few of my sheltering trees in the Secret Memorial Garden area, and I was not really very happy about that. I tend to be a bit of a "tree-hugger", and I would preserve every single tree if I could. But these "arborists" convinced me that the trees would be healthier if there weren't so many competing for the sunshine. 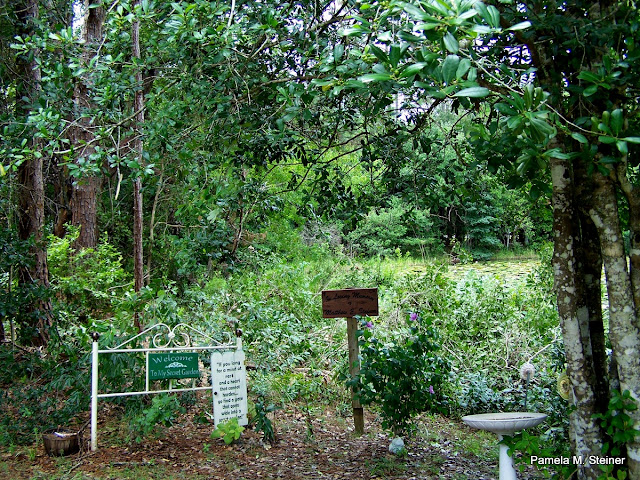 I will be doing some revamping of this area once everything is completely cleaned up. Just may have to rearrange where we put the swing, etc. but it will still be fine.
Here they are preparing to cut down the remaining big dead pine tree that was the "twin" to other big pine that fell down a few weeks ago. 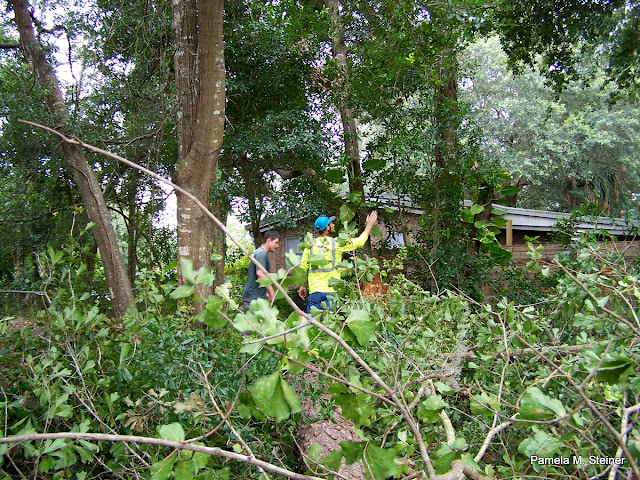 It was very dead and weak, and already starting to lean in the wrong direction.
This is a video that I took as the tree came down:
And below is looking at the space where it was above the trees in the middle after it was gone. 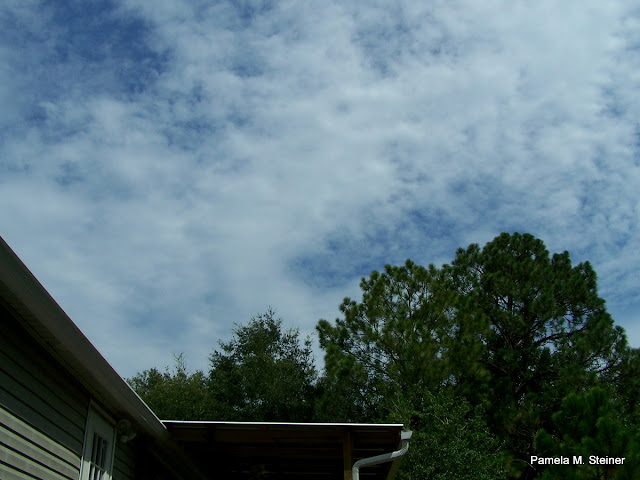 And here is why you can see it needed to come down. It was very diseased. Next came the clean up. Because these were actually neighbors of ours doing the work, who are qualified tree experts but working over the weekend on their own time, they did not have the equipment available for removal of the debris. However, one of the men's teenaged sons and his friend wanted to earn some money and were willing to finish cutting up and loading and carrying the debris to a nearby disposal site, using their own pick up truck. Let me just say that these two young men earned every dime we gave them and then some, making numerous trips back and forth with loads of tree debris, working until dark...and never once complained or slacked off on the job. I was so impressed with them that I would recommend them for any job any time. 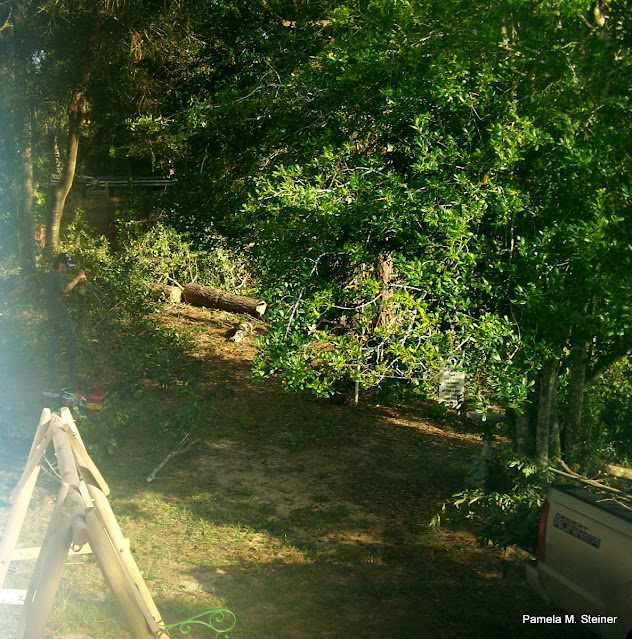 Just two country boys with a truck, working hard and showing great respect in the process. Helped to restore my faith in the young people of today. 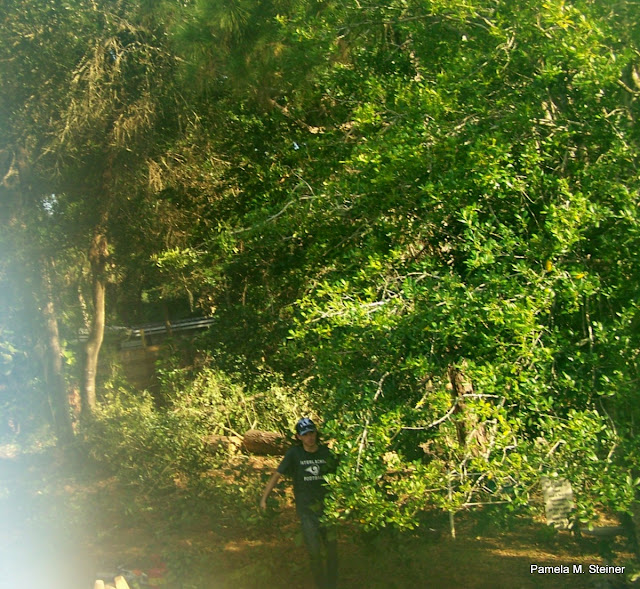 Now, here's a scoop! One of the tree trimmers (the boy's father) came back later to check on their progress, and also asked if it would be okay if he took out the kayak and paddled around Still Waters Pond.  He wanted to do a little exploring. That was fine with us. I haven't been out there all year, and I was happy for someone else to check it out. 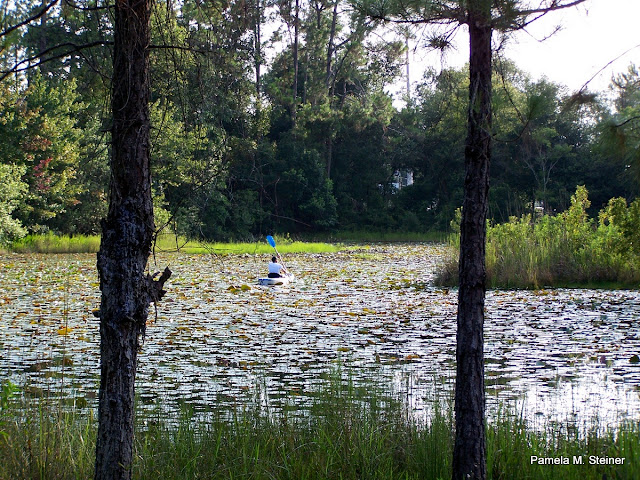 Well, he came back quite excited to tell us that he spotted on the other side of the pond what appeared to be a "very large gator"..."perhaps nine feet long or more", and he could see where he had a trail going up on the shore over there.  I was incredulous, stating that we have never seen any evidence of a gator in this pond, but he was quite sure, and I know he knows what he's talking about, being a country boy "who grew up in the swamps around here" (his words, not mine). 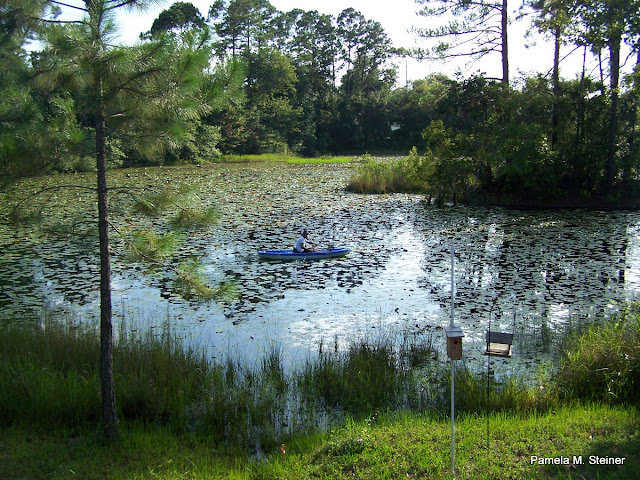 I tell  you, that's a stunning revelation, and one that will keep me from going out in the kayak probably ever again...I told my husband that here I was feeling sorry for myself that because of my neck issues I hadn't been able to paddle around the pond in so long...and now I believe that God was protecting me from perhaps coming upon Mr. Gator face to face, 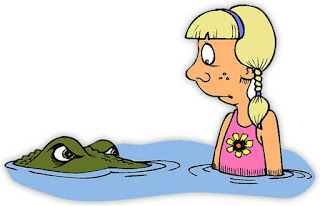 and I know I would have probably panicked and done something very foolish in trying to escape said gator...Yes, I believe God was definitely protecting me from dying of fright, even if the gator had no interest in me at all! 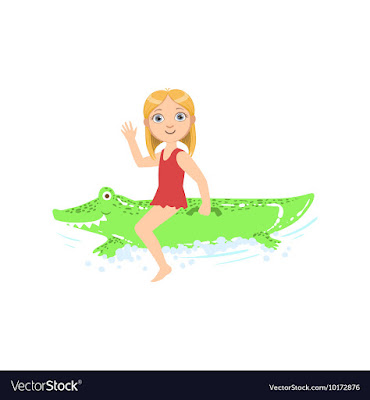 I think I'll stick to playing with Lily Grace from now on. 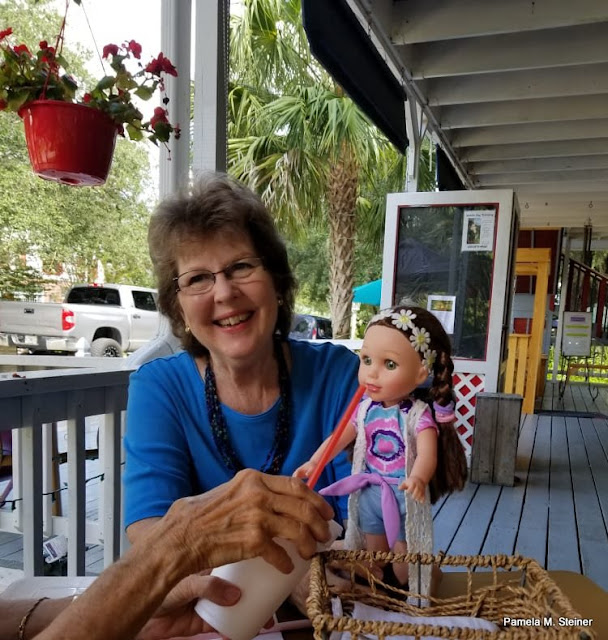 (This picture was taken on our outing with our blogging friends Terri and Barbara. You can see that someone was giving Lily Grace a sip of a cold drink because it was so hot. I love what good sports everyone is regarding this sweet little friend of ours!) 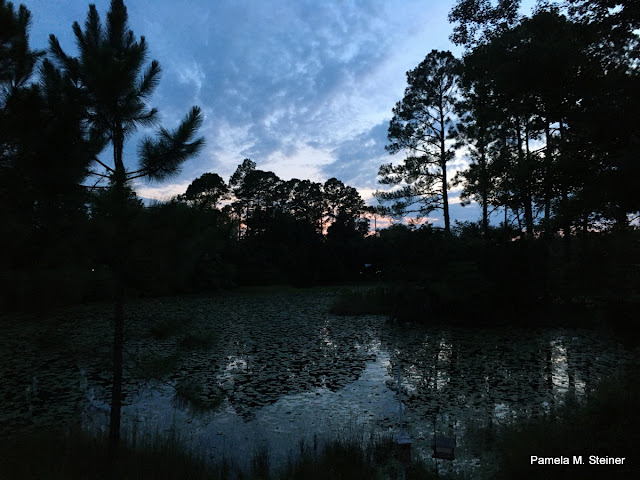 Now I will close this post, (which has taken all day to write because of other interruptions!) with a view of the sunset over Still Waters Pond the other evening. No sign of Mr. Gator out there...
I like what this passage says:
"You will keep him in perfect peace,
Whose mind is stayed on You,
Because he trusts in You."
Isaiah 26:3
When we put our trust in God, we need not fear what any beast or storm or man can do to us.
I also like this promise found in Isaiah:
"No weapon formed against you shall prosper,
And every tongue which rises against you in judgment
You shall condemn.
This is the heritage of the servants of the Lord,
And their righteousness is from Me,”
Says the Lord."
Isaiah 54:17
Thank You, Lord, for Your protection and blessings, no matter what comes our way.
Posted by Pamela M. Steiner at 2:20 PM 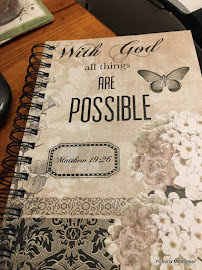